This open source tool from Microsoft works on Linux, Mac, and Windows and builds off a very familiar foundation for anyone accustomed to using Visual Studio Code (opens new window).

While its previous form had some rough edges, the 1.0 release of Azure Data Studio and later iterations are much more polished and deliver amazing functionality and performance when compared to SQL Server Management Studio. 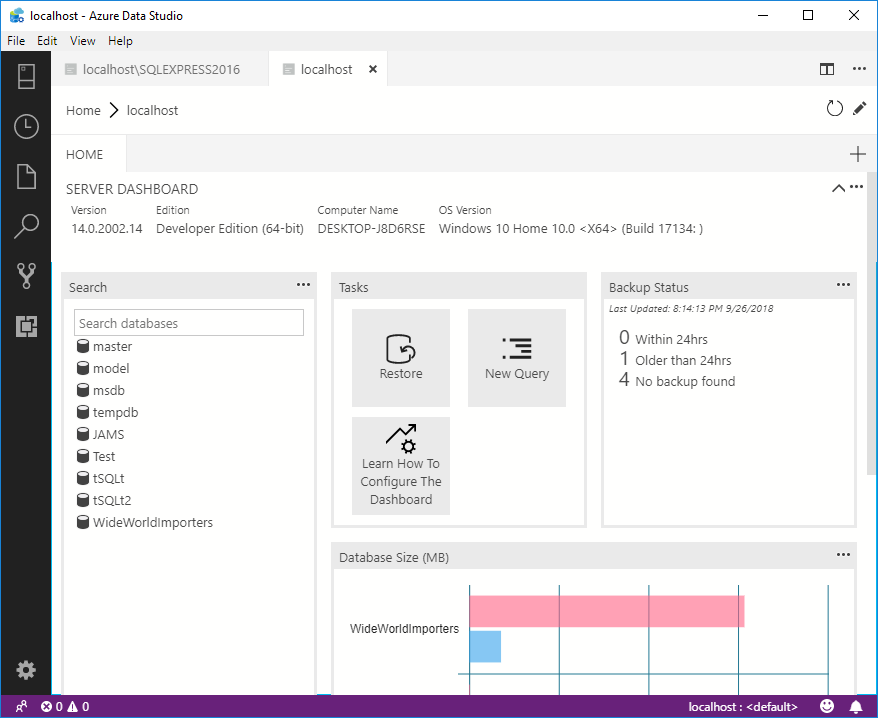 Right after connecting to a SQL instance a dashboard provides instance information, action buttons, a list of searchable databases, backup statuses, and database sizes in chart form. These are just a few default examples of what incredibly useful and powerful data can be shown as soon as you connect to a server.

Azure Data Studio is definitely targeted towards data-minded individuals. With integrated source control support, a host of free extensions, a file explorer, support for Notebooks (opens new window), query results to graph capabilities it offers an ease of working with SQL and data that other database platforms have not come close to providing. And for anyone accustomed to using SQL Server Management Studio, the inclusion of both a fully supported dark theme and a blazing fast, reliable Intellisense are things that only dreams were made of until now.

If you're a developer, data scientist, or pretty much anyone except for a DBA, then this is probably a tool that will fit your needs much better than SQL Management Studio ever will - end of story.

If you are a DBA and you find yourself needing to work with SQL Agent, in depth-configurations, and wizards on a frequent basis, then (for now) Azure Data Studio probably won't fulfill your day to day needs. It does have increasing support for these areas, like the SQL Agent extension, which can show a novel view of current and previous job statistics:

Microsoft does provide this chart (opens new window) as a helpful comparison of features between Azure Data Studio and SQL Server Management Studio.

Extensions in Azure Data Studio are free, much easier to work with, and can be directly installed from within the application itself when compared to Management Studio. Microsoft has continued to come out with a great catalog of tools and gotten some great third party tooling support as well. A full list of Azure Data Studio Extensions (opens new window) is on Github. Some of the most useful tools include:

Azure Data Studio will no doubt be getting a lot of love from Microsoft and the open source community over the next few years and now supports a ton of new SQL 2019 features (opens new window). Its features will probably also include things that Management Studio does not, and I expect it to take on many areas that it currently lacks in comparison to SSMS. There will be fewer and fewer reasons to open SSMS over time and if you're a wizard at PowerShell already, this might already be the final nail in Management Studio's coffin for you.